In an earlier post I blogged how I had made a Monte Carlo simulation model of the Six Nations Rugby Tournament. With the final round of the tournament approaching this Saturday, I decided to do a quick update.

Who can win at this stage?

Wales, England, or Ireland can still win. Scotland, France and Italy do not have enough points at this stage to win. Quite a good article from the London Evening Standard explains the detail. The current league table is below.

Actual standings after round 4 out of 5

Who is playing who in the final round?

What is the simulation model based upon?

A random sample from a probability mass function for tries, conversions and penalties, which is combined with a pwin for each team, calculated based on the RugbyPass Index for both home and away teams. If you want to know more, feel free to look at my previous post (linked above) or the R script (linked at the bottom).

What does the simulated league table look after the final round?

Running a simulation for the final three games, and adding these results on to the actual points each team has achieved after round 4, we get the distribution of league points shown below.

Apologies: a box plot can be a bit odd for discrete data such as this. Please forgive me! If I had the time I would reform this into something like a stacked histogram which would be more accurate🙂

It should be noted that, whilst the ‘standard’ scoring scheme applies for these final matches, i.e.

…there are also 3 additional points awarded if a team wins the ‘Grand Slam’ (wins all of their matches). The candidate for this is Wales only. They have so far won every match, and if they win their final match they get these extra points to ensure they win the tournament.

This rule avoids the situations where a team could lose one match but obtain maximum bonus points in the other, finishing up with more points overall than a team that has won every match but never obtained any bonus points.

So then, what are the final standings likely to look like?

After having run a simulation of the final round, the results are below. 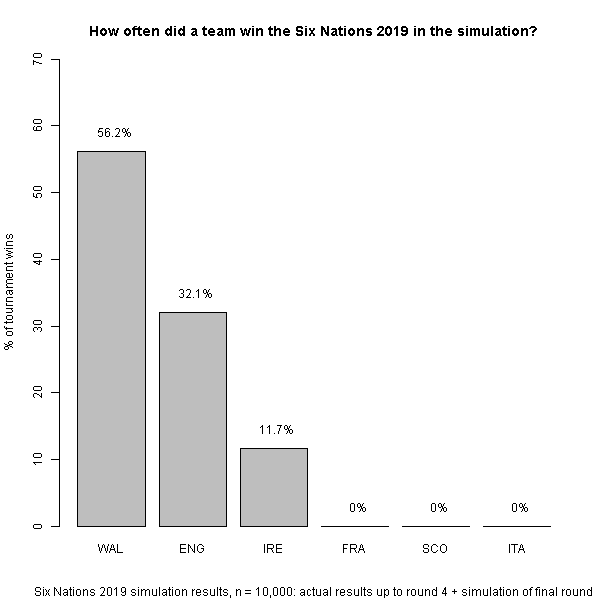 Wales are “firm favourites” to win the tournament. England have a “reasonable chance”. Ireland retain an “outside chance”.

How does all of this compare to expectations before the start of the tournament? 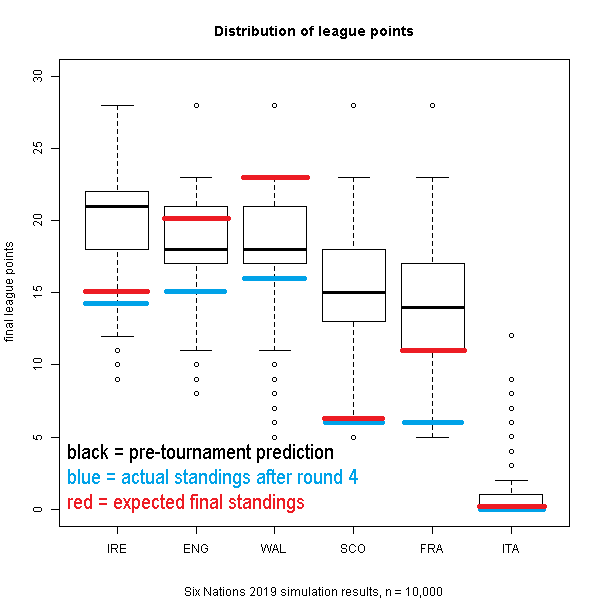 Scotland beat Italy with a bonus point victory, but they have only managed to pick up one bonus point in their other games. Picking up points against England in their final match will be tough. So they will be likely to under perform. France will likely beat Italy and perform roughly as expected. Italy are looking firm against the prediction of finishing bottom again this year (however imho they could be a team to watch in their final match, as they’ll be playing a presently disorientated France, at home in Rome).

It has been an interesting journey for me simulating sports tournaments over the past few months. Monte Carlo approaches can help you see the wood from the trees in complex situations, which has applications not just in sport but in industry as well.

Maybe this has inspired you to have a go yourself? If so, the code for this blog post is available via Git here. Although if you wish to have a play or to adopt the code, the original version is much cleaner, available here. Good luck!